In today’s world of hard-fought markets and ever increasing competition, it is rare to find a company with over 150 years of continuous operation. AERZEN is one of those. For generations this family enterprise has stood for quality and innovation. AERZEN’s latest innovation – AT Turbo blowers for wastewater treatment – is one more proof of this: amazing performance that sets new standards for energy efficiency.

Active magnetic bearing and air foil bearing technologies are both excellent solutions for high-speed applications, such as turbo blowers. They are virtually maintenance-free as they operate without lubrication while offering low friction.

However, with decades of experience in high-speed turbo blower design and manufacturing, AERZEN believes in air foil-bearing technology as the most efficient and reliable of the two options.

The primary features of the AERZEN air bearing system include: 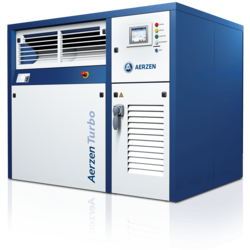 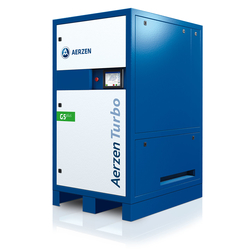 AERsmart – Overriding control for operation according to requirements of load changes

The AERsmart control system can control up to twelve machines. Thus, due to the intelligent interconnection of the energetically most optimal machines enables the highest total efficiency – quite SMART.

Pinpoint control of load cycles. For a completely new kind of efficiency in aeration tanks.

Variable air requirements and peculiarities in the design and construction of aeration tanks are challenges for any sewage treatment plant. The result: extremely high energy consumption that can make up to 80% of total costs. The solution: innovative combinations of blower, hybrid and turbo blowers from AERZEN. Maximum energy efficiency for basic loads, pinpoint adjustments for peak loads. The result: hitherto unknown efficiencies over the entire operation. The investment can pay for itself in as little as 2 years!

Dynamism. Performance. Intelligence. A Turbo in every detail

They are decisive for performance values and energy efficiency: the impellers, drive motors and frequency converters in each variable frequency controlled unit. That is why we have something against standards in this regard. Instead: key components developed especially for different areas of application. So that when we call it a Turbo, it really is a Turbo.

Intelligent and farsighted. This is how high efficiency is controlled today

High-performance technologies such as the Aerzen Turbo help reduce energy consumption in aeration tanks. Provided, of course, that they run at optimal efficiency. In the Turbo Generation 5, this is handled by AERZEN’s advanced control and operating system. One of the many success stories from our R&D teams in their work on the new Turbo Generation 5.

Dynamism. Performance. Intelligence. A turbo in every detail

Intelligent and farsighted. This is how high efficiency is controlled today